Beginning of Chapter 1: "The Right to Wear a T-shirt. Purpose"

They were all dressed the same: gray T-shirts, black shorts, short hair - everyone was like that except for a group of guys with longer hair and brown T-shirts. After physical training, I got a better look at them and noticed that their T-shirts above the left pocket had names like in the Navy. I was sure they were "SEALs".

During training, the SEALs stuck together. I saw the instructor make a remark to one of them and ordered him to do ten push-ups as punishment. As soon as the "SEAL" started to perform, his comrades also began to push up with him. In chorus, they said the score: "One, two, three ...". No one approached them, but I desperately wanted to sit on their brains with questions about BUD/S.

To be honest, I would like to be one of them.

During the second week of training, I finally decided to speak to one of them. It was at lunch time and one of them was sitting across from me. We didn't talk at first. I was in a daze and could not start the conversation first. But after a few spoons, the SEAL finally spoke up first.

"Friend, can I have a question?"

Unlike the "SEAL" I met in Washington, this one was not so massive and his hair was much shorter. He was formal with me, but without arrogance.

I have already prepared myself for an exciting conversation with one of the SEALs. Deep down, I have already prepared a million questions. Moreover, I knew that this guy had recently completed the qualifying course. But while I was flying in the clouds and imagining my future "fur seal" I saw in front of me a boy who had come to play in the army for three weeks.

“Why did they cut you like that? I do not understand. Why do you need these military hairstyles? "

I froze with a spoon to my mouth.

I could not believe that this question was asked to me. I was asked without a hint of ridicule or mockery. Everything was quite serious, which only made it worse. The question pissed me off and at the same time discouraged me.

"I don't know why, seriously."

I tried unsuccessfully to translate the topic into a BUD/S course. I didn't want to talk about anything else at all. As a result, I got confused and hesitated.

At the end of the conversation, something clicked inside me. I decided to quit with the Army. Returning to California and donated the uniform.

I signed the papers for expulsion and was about to leave when one of the officers approached me.

“Boy, are you sure you want to leave? We need smart guys and we are very sorry that you want to drop out. "

“You studied well. Do you know that we send only the best to the parachute school? "

I accepted this compliment, but this did not change my decision to leave the Army.

"I want to become a" Navy Seal ", this is my dream since childhood."

It was a big risk. Leaving ROTC I was missing my chance to receive a scholarship. But it was worth it, sometimes I think that only by risking a lot you can achieve serious goals. How my parents once left to live in Alaska, away from family and their support, in order to achieve their goals. I took their action as an example for making my own decisions.

I'm sure most of my squadmates had the same thoughts. We all wanted to be part of something bigger. I turned from my path and lost understanding - what do I really want.
When I finally signed a contract with the Navy, I went to the category "A" training, which will decide what my specialty will be if I fly past BUD / S and do not become a "SEAL". Initially, the personnel officer wanted to send me to a subdivision serving nuclear reactors on submarines and aircraft carriers. The training would take 18 months. I knew that HR people got bonuses from sending people to long-term programs, but I couldn't wait that long, my goal was the BUD / S qualifying course.

“What is the shortest training course?” I asked the personnel officer.

He plunged into the depths of his desk until he found a folder containing a list of training courses. As he ran his finger down the list, he stopped and looked at me.

“Torpedo operator. Seven weeks. " At that moment, he apparently resigned himself to the fact that he would not be able to send me to the "nuclear" program and earn himself points.

Instead, I'll be blowing dust off the torpedoes for a couple of months and maybe get a chance to qualify for the BUD / S qualifying course. I didn’t think long about the fact that I could fly with him. However, four years in the role of a torpedo operator could well drive me crazy and make me leave the Navy for good. But then I absolutely did not think about it.

I set myself a high bar and was confident that I would either achieve my goal or die trying. I didn't want to wake up one day as an old man who would regret not even trying to do something for his dream. 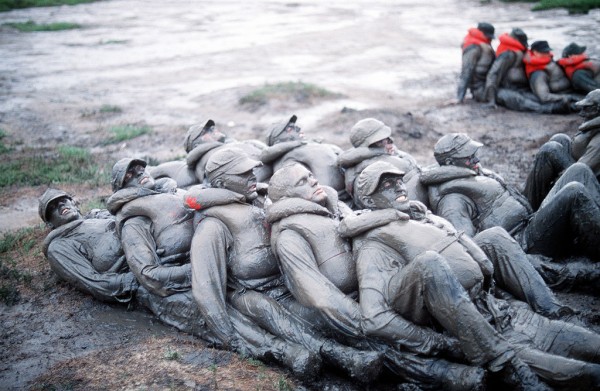 In my confidence to become a "SEAL" I found a certain calmness. My parents were an example for me. They showed what it means to live for something more. I turned out of the way when I went to study at ROTC. And that lunch at the parachute school put me back on this path. When I looked in the mirror, I saw a capable and disciplined person who knows his destiny. I just needed a chance to prove it. And nothing else.