Over the past few years, the L4 G24 mount, in its authentic form, or in various quality Chinese made forms, has become the standard for dovetail fixtures.

Paradoxically, there are several main reasons for popular love for such a construction:

- The rest of the mounts are corny worse in terms of performance and applied design solutions.
- For many who want to combine a Chinese helmet with the 14th NVG, which has been on the wanted list for the fifth year already, the task becomes easier and becomes much easier, to grind a simple adapter from a regular locksmith of the local housing office, rather than try to adapt a "standard" complete mount to a "Chinese strikeball opskor helmet "and a primitive rhinomount with a horn / bayonet connector.
- Availability of replicas and maximum functionality regarding the portraits of Benjamin Franklin. With a frivolous approach "for airsoft will do" and minor deviations of operating conditions from "normal conditions" in the academic sense of the term.
- The need to maintain a balance between cosplay and modeling with the above approach.

In general, the described order of things will calmly exist for another five years, but now all this is starting to seem boring to Wilcox, and slowly he rolls out new long mounts, in an extremely strange way lengthening them in one place and cutting off their functionality in others.

In addition to the standard entrance threshold (in the form of some personal acquaintance with the ergonomics of the L4 G24 and its derivatives), in the presented material, you need to familiarize yourself a little with the mount design, inside which there is some hidden modularity, for some reason every time is masked by the manufacturer behind a clear designation of the model of the entire assembly on basket.

What you need to know about L4 series mounts before reading further:

In general, almost any Wilcox mount that has a lever for fixing the height of the device relative to the user's eyes can be easily disassembled by unscrewing the two screws securing the plastic travel stop. 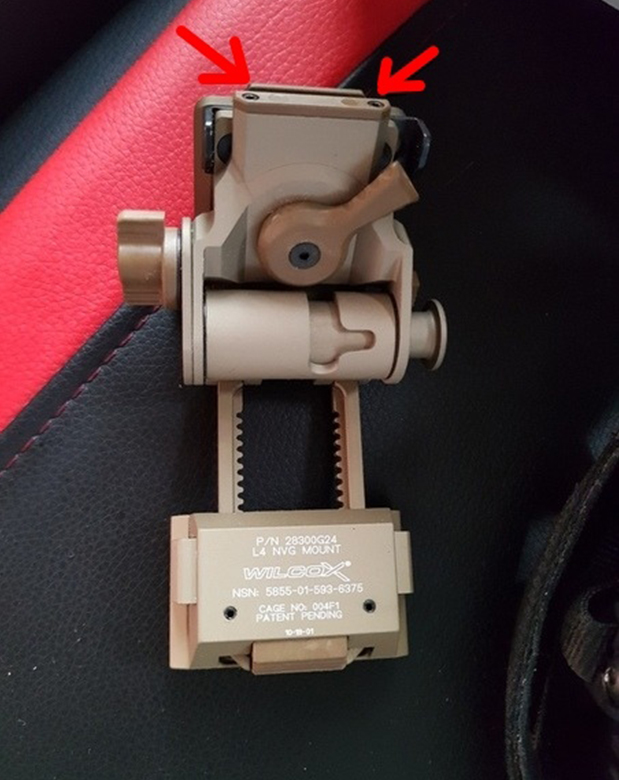 Thus, we get two halves of the mount with strictly separated functionality.

Forgive the rural terminology, but I will introduce them as "basket part" and "mating part". 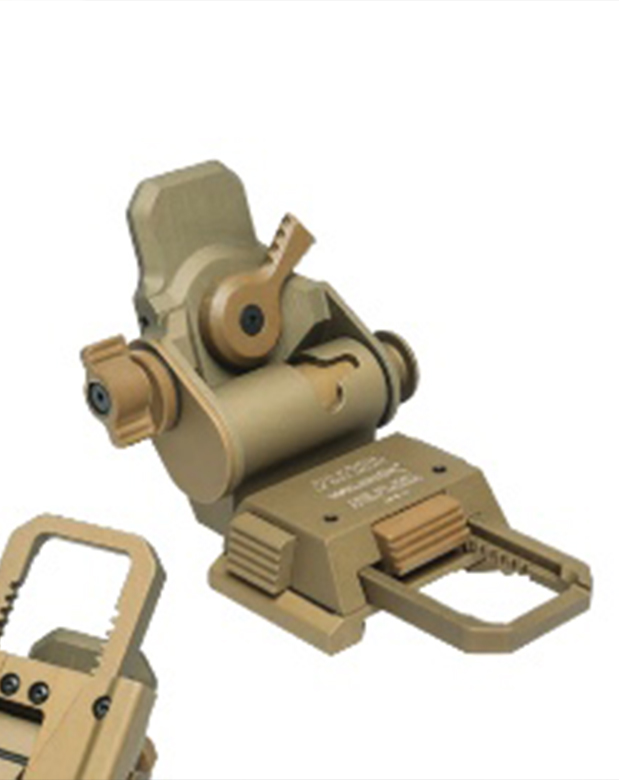 L4 G24R as a "part with a basket" (there is no travel stop, but this is a convention of the illustration)

The part with the basket is inserted through the removed travel stop into the counterpart, and is held on it by friction (created by turning the lever), as well as by the travel stop on the screws. For those who have sinned a lot, the mount in this place also has backlash, for those who did not pass the check for luck, it has backlash right out of the box. 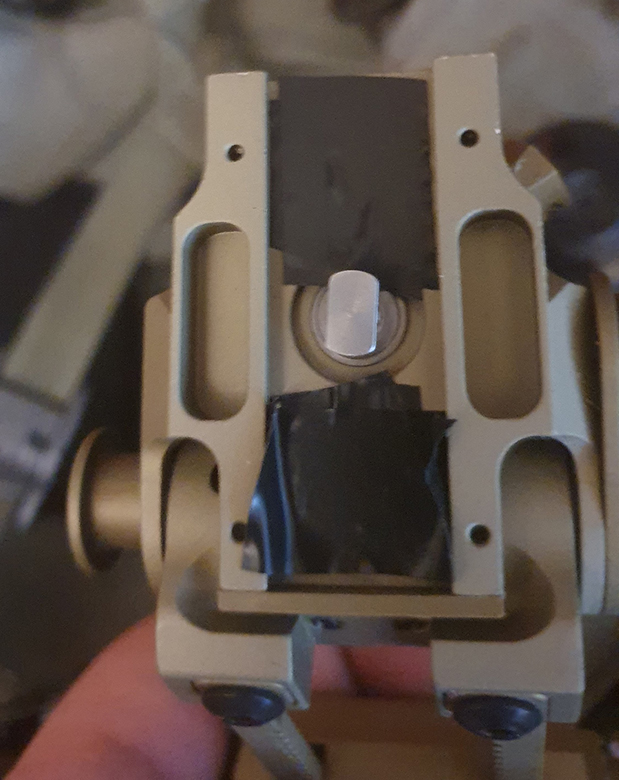 Back side illustration. I flunked a check for luck, I had to choose backlashes using ancient methods.

What do you need to know about these parts? 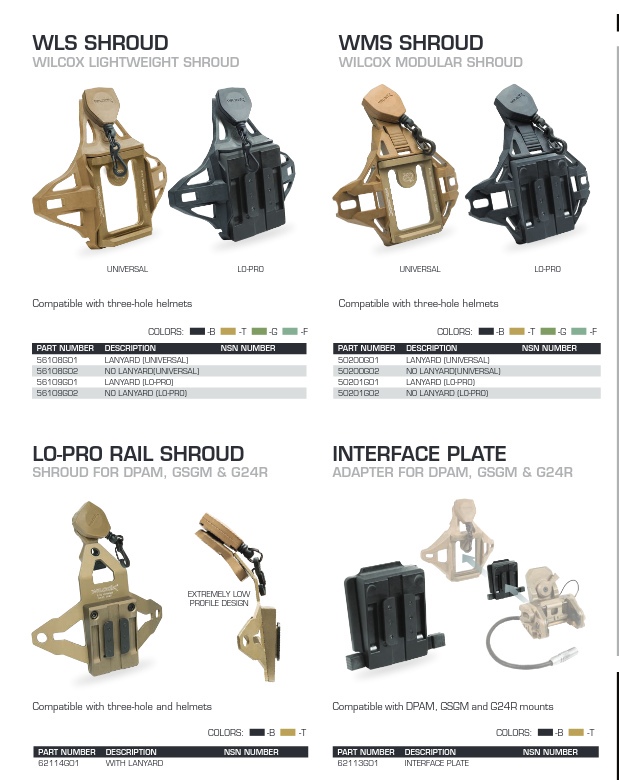 A set of shroud for every taste from the Wilcox catalog as a "mate".

The mating part can be either detachable or permanent relative to the helmet, attach to itself other mounts with a lever, contain breakaway functionality, or have other functions unknown to me and the general public.

The part "with the basket" is generally identical, if not in appearance, then in functionality *.

* with a few exceptions in the form of the semi-mythical L4 G69, which Wilcox has not yet mastered to make in 2020.

All of these mounts have an extended basket travel. About 1/3 from the G24.

Question from the audience: Is that all? I'm doing just fine, no problem. Was it worth writing an article for this?

Yes, it was, now we will explain why it is needed.

No matter how the users of the L4 G24 with the "straight" j-arm from Wilcox cry that at the minimum travel position their PVS-14 is too far from the eye on the precious opskor, there are a lot of opposite situations.

The easiest option - you still took some kind of bridge for two 14s, put on ballistic glasses and amber filters, and the whole assembly, at best, hits ballistic glasses, or has no move when adjusting the distance to the eyes. A trifle, but discomfort.

A more complicated option - PVS-15 with amber filters and ballistic goggles. It simply presses these glasses to the eyes when lifting / lowering, which may need to be performed a dozen times a night.

Even more difficult - you want to hang up an adapter for GoPRO with a camera / lens, but there is no place.

Even harder! I would like to use some IR Patrol on my helmet, but there is no room for ballistic goggles and even the eyecup does not fit.

Hardcore level: everything is the same, but with a gas mask. Yeah, and different gas masks.

What are they and what good is it?

To begin with - L4 G24 from the Chamber of Weights and Measures on the scales. Remember the numbers, we will neglect the screws. 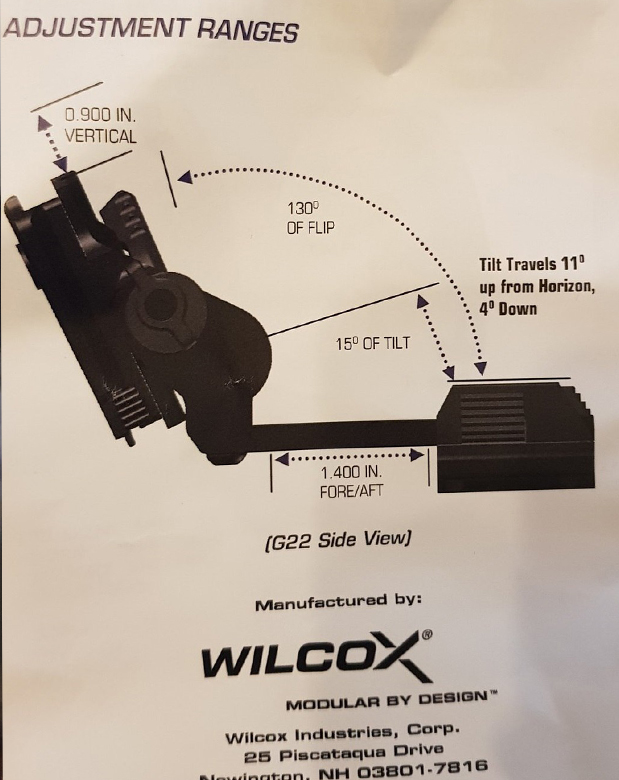 If you look closely, you can see the difference in the absence of a breakaway.

Drop-in replacement: just put it on and enjoy a longer mount.

We will neglect screws and bolts, old bolts will not work. 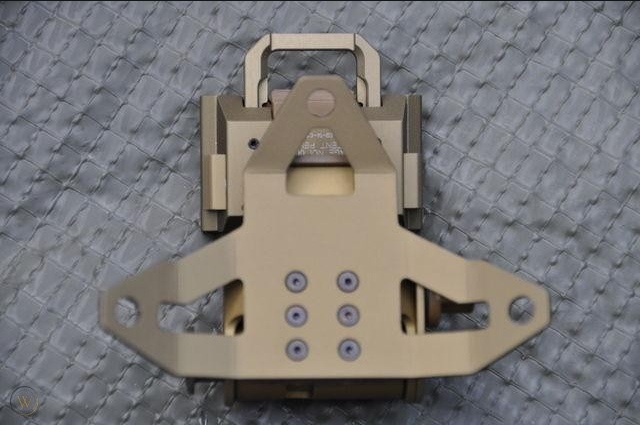 Unfortunately, in this position it is not fixed by the internal mechanism.

Ancient frescoes, 2 BC (the beginning of the epidemic):

Apparently it will be the next mount.

What is the bottom line?

Evaluate applicability according to your usage scenarios, which is good with SkeetIR, but with MNV-K alone ... it may not be feasible.

G22 - may be good options in the general case, there is not much gain in weight, there is a loss in functionality, there are no problems in case of transfer from different helmets.

G69 - Made from unobtanium. Just kidding, not made, they promised before Christmas. True, back in May. In theory, a very promising option, extremely lightweight and even lower profile.

For the impossibility of smearing myself with the G69, I hung up the G66. The impressions are:

- The overall profile of the attachment is significantly reduced, although there is a jamb in the form of the inability to fix the mount in the position closest to the helmet, helmet-mounted elastic bands help. On the G69, this problem shouldn't be.

Cuts off more than a quarter of the weight.

If there is a thermal imager, which is used during the day on a helmet, there is essentially no need to remove the mount, so the removability of the mount can be neglected. Having multiple helmets or headbands is not a good option.

What's so strange about that?

The only detachable model with Extended Travel is the G22 (in some places with the letter E, which does not affect anything). Besides ET, it weighs a few grams less and ... it lacks Breakaway. Of course, the functionality can be returned by recombining the G24 and G22, but the absence of a roughly lengthened G24 is extremely surprising. Perhaps the point is simply that the leverage is greater, but the reasons are still not clear.

And then what? Wilcox makes the rest of the models one-piece. Those. there are only two options, without additional fiddling: eat what is given in the form of the G22, or look at the G66 and G69, which, in fact, are the same, but the G69 is sharpened for a lower profile and lightened at the end of 2020 you can't buy.

How to live further?

If everything suits you in those use cases where the problem is described - in general, as before (it happens completely), but if this particular mount gets into your use case, just take it and enjoy it.

It is very likely that these mounts will one way or another start to become widespread due to the wider distribution of equipment on which the G24 is no longer exporting.
Probably, Wilcox will come to its senses and release a model for a single-hole helmet or a model with a new Breakaway implementation.
Probably all of the new mounts will get lighter and start folding like the G69.
One and a half grams will cease to be an unbearable burden on the helmet and everyone will just get used to the permanent presence of a neatly folded mount on the helmet.
It will no longer be a problem to find a place where to stick the mount during the day.
In short, they will bury the G24. With time.