The paratroopers worked without a parachute landing from a helicopter

Servicemen of the 25th separate airborne brigade of the airborne assault troops performed the landing from a Mi-8 helicopter using a set of detachable onboard equipment "Kanat-1" from heights of 5, 10 and 20 meters.

According to the head of the air training department of the 25th brigade, Lieutenant Colonel Grigory Bezkrovny, the parachute landing with the help of the KBZO "Kanat-1" was preceded by painstaking training of personnel on the ground. Then a phased preparation took place with the involvement of aviation - descents from 5, 10 and 20 meters. 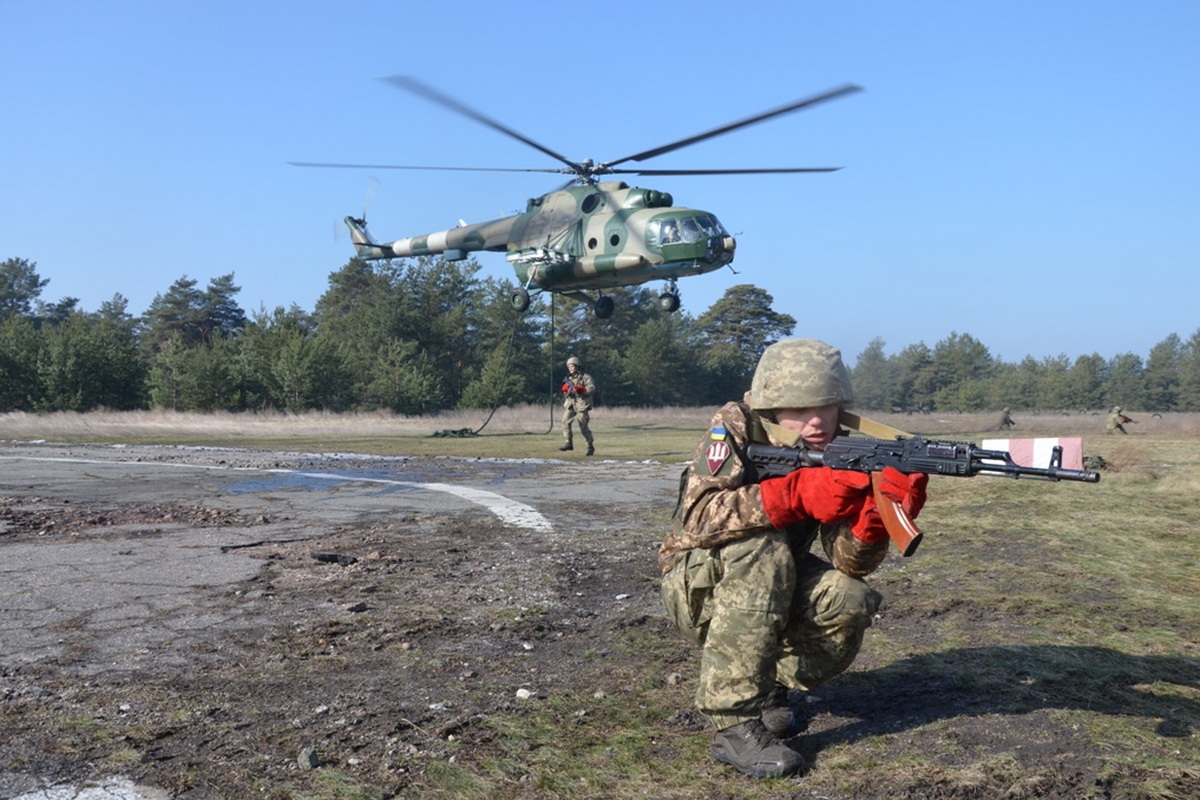 “The descents are carried out with standard weapons and equipment by regular units, which will then carry out the assigned tasks.

Thus, the landing can be used in swampy areas where it is difficult to carry out a helicopter landing. It can also be an urbanized area, where buildings do not allow a helicopter to land, as well as a forest - the car hangs, releases ropes, with the help of which the landing is carried out, ”says the officer.

Some of those who performed the exercise already have experience of parachute-free landing, but most of them are doing it for the first time.

A conscript soldier Igor Dramoritskiy, originally from Slobozhanshchina, has already served six months, there is still a year ahead of him as a scout-rangefinder. Igor is performing the exercise from a non-parachute landing for the second time, and a month ago the guy performed his first parachute jump from a height of 800 meters.

“This is the second time I am landing in the following way. Emotions overwhelm that again for the first time. Descending from a helicopter is very cool, I recommend it to everyone. Join the ranks of the airborne assault troops - the best troops in the Armed Forces, it's incredible here. You will fly in helicopters, make three parachute jumps - the first from 800 meters, the second from 600 meters, it will be a combat jump - you will definitely like it! "- not hiding his emotions, says Igor Dramoritskiy.

Reference. Non-parachute airborne assault using the KZBO is an integral part of the combat training of airborne assault troops, marines, special operations forces and special forces of the Military Law Enforcement Service of the Armed Forces of Ukraine. KZBO "Kanat-1" is used during disembarkation on the territory, the relief of which does not allow the usual method of landing, as well as during disembarkation on limited areas.

Since 2006, the Ukrainian Armed Forces have conducted a series of tests of the adapter-M1 parachute landing system made in Ukraine, and in 2013 it was put into service. However, after the annexation of Crimea, the manufacturer (Feodosia) left all capacities in the occupied territory. In 2016, the Inspecprom company (Chernigov) developed the Kanat-1 parachute landing system - an improved analogue of the Adapter-M1. The State Scientific Testing Center of the Armed Forces of Ukraine carried out the ground and flight parts of the tests of the KZBO "Kanat-1", according to the results of which the system was adopted.