The first announcements of the release of the Crye Precision G4 Combat Shirt of the fourth generation began to appear in February 2018. In December 2020, the new generation became available to the general public in cuts optimized for both male and female physique. And although this generation is currently considered relevant, Crye Precision G3 Combat Shirt does not lose its popularity and prevalence, and is still presented on the official website of the manufacturer.

In the third generation, Crye Precision continued to improve the cut and characteristics of its second-generation combat shirt, and expanded them to the next list of benefits. 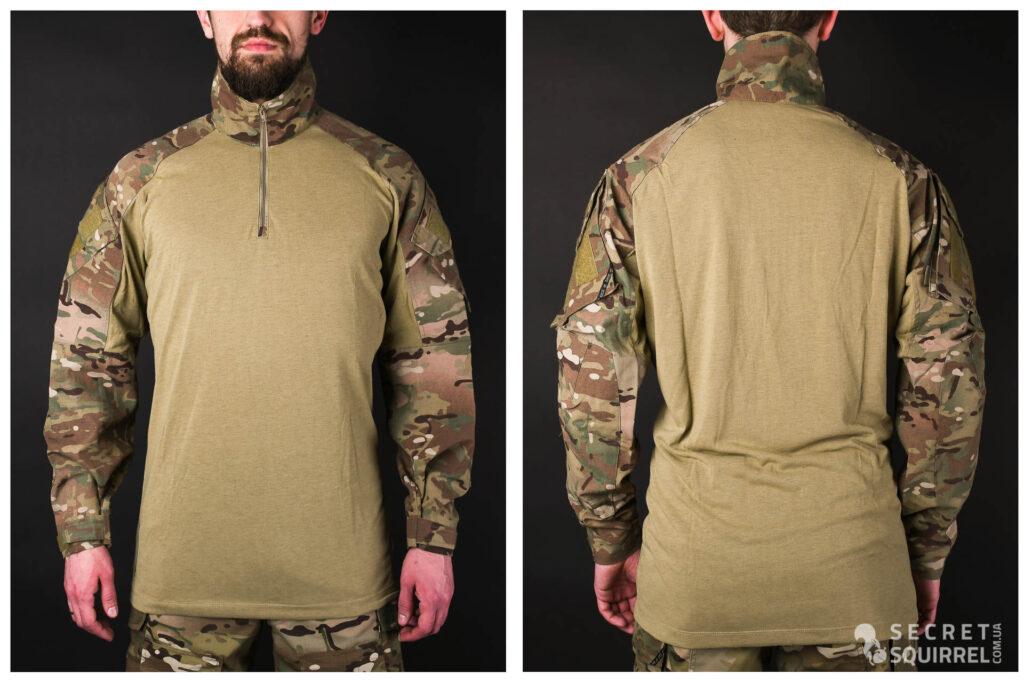 Conceptually, the purpose of the Crye Precision G3 Combat Shirt has not changed - it is the same lightweight combat shirt, a kind of compromise between tight arm and shoulder protection at the level of a traditional coat, and a light torso, which increases comfort during prolonged wearing of personal armor. During the transition through the generations, mainly materials, choice of colors and cuts have changed.

The sleeves and shoulders are also made of 50% NYCO - a mixture of nylon and cotton in Multicam camouflage. This choice is justified by the desire to combine the wear resistance of nylon fiber with cotton, which is pleasant to the touch and does not cause discomfort during prolonged wear. As for the material for the torso, the third generation shirt has changed its supplier and composition. Now it is the American company DRIFIRE, which specializes in refractory materials, and has offered a mixture of 80% Modacrylic, 15% Viscose, 5% X-Static for Crye Precision G3 Combat Shirt.

But the most noticeable change to the eye, probably, will not be the manufacturer and composition of the material, but its color. The light gray torso of the second generation shirt changed the refractory material in the color Tan. So now the torso of the shirt is more compatible with the main background of the camouflaged part, and also does not unmask the owner on the ground.

In addition to the described changes in the materials, the cut of the Crye Precision G3 Combat Shirt has also changed, to which I propose to proceed in detail. 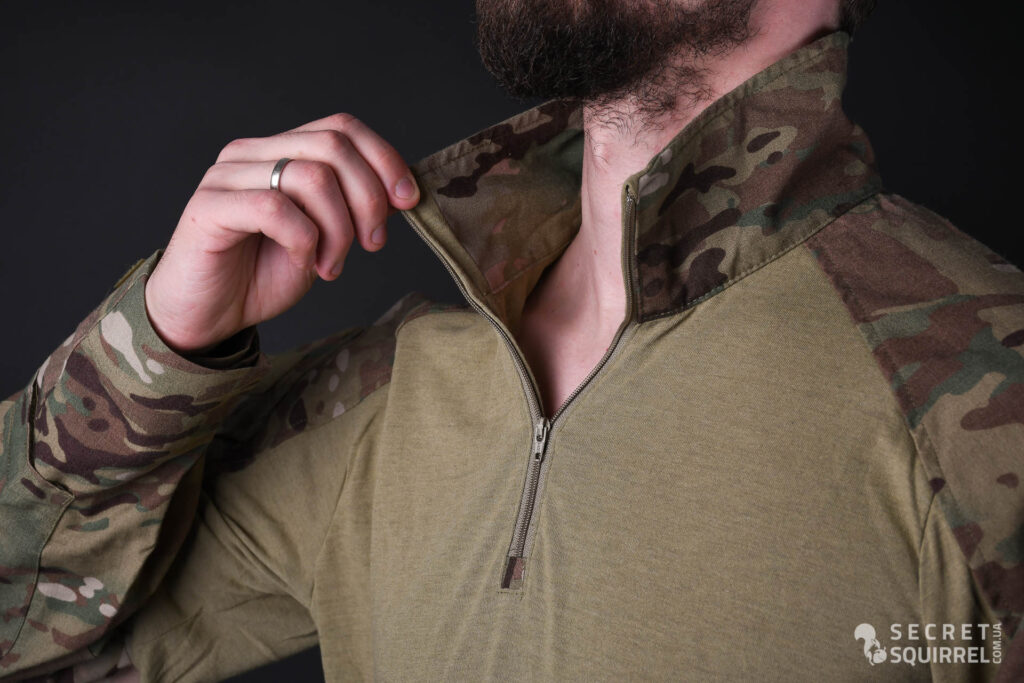 The Crye Precision G3 Combat Shirt is the same stand, well known from previous generations. Previously, the height was constant and was 8.5 cm around the circumference. Now it changes from 7.5 cm in front to 10 cm behind. A smooth change in height also protects the back of the neck from sunlight, rain and dust. At the same time, you will not cling to your chin with too high a collar and zipper at the front. In general, a high collar protects your neck not only from the negative factors of weather and the environment, but also from rubbing the side surfaces on the straps of unloading equipment, backpacks and body armor.

At the front of the collar is a YKK zipper 20 centimeters high. In the Crye Precision G3 Combat Shirt, it also has a windshield inside so that the zipper does not cling to the skin. 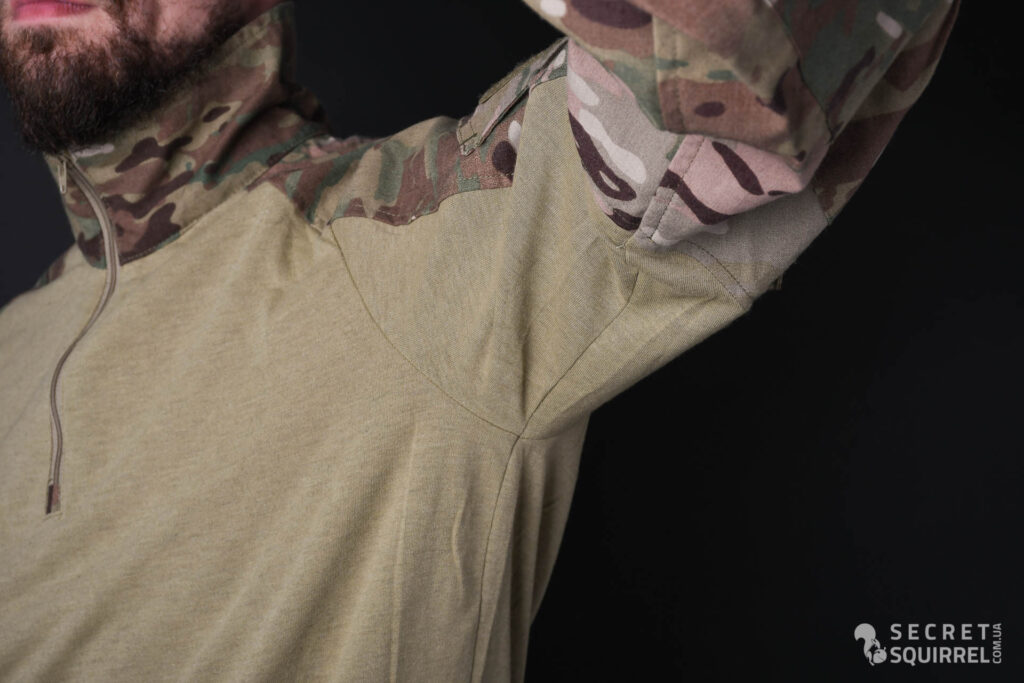 The armpits of the Crye Precision G3 Combat Shirt are also made of refractory material, which allows excess moisture to be distributed over a larger area and evaporate faster. This process improves thermoregulation and prevents condensation from accumulating inside the sleeves or under the armor.

In the photo above you should pay attention to the central seam of the inner surface of the shoulder. In the shirt of the second generation here the insert from the main material which had bigger density began. In the third generation, the soft material of the torso extends beyond the line of the central seam, so the material of the shirt will not rub the armpits when using bulletproof vests with a high fit, or tightly tightened straps of the backpack. 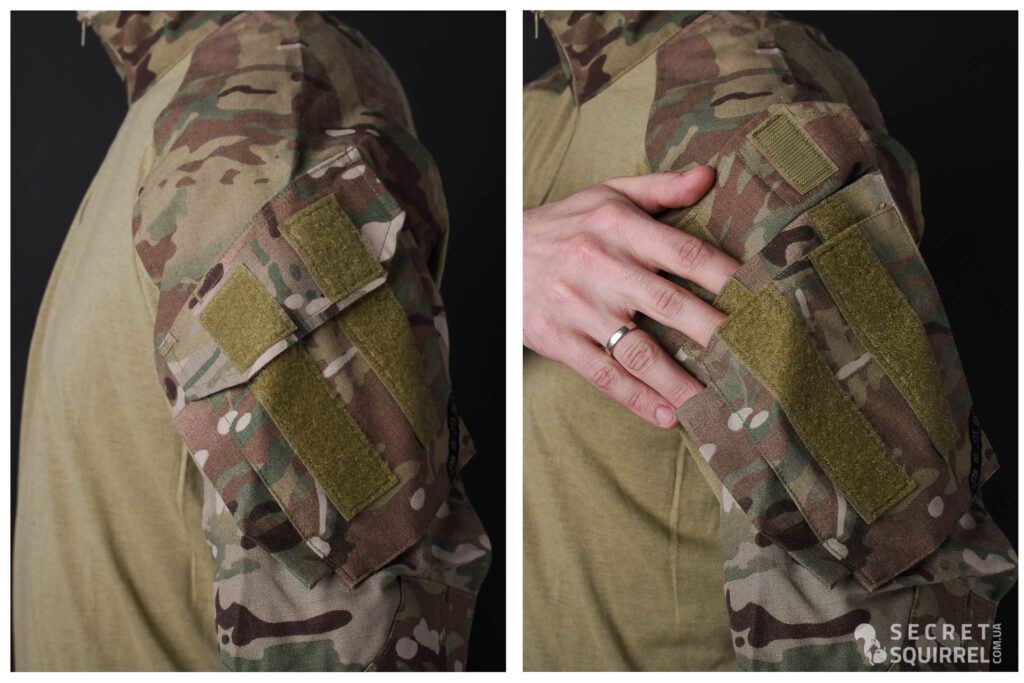 The Crye Precision G3 Combat Shirt has undergone the most changes. They apply to valves, and internal organization, and external Velcro, and additional holders. But about everything gradually.

The pockets also have an ergonomic tilt of the upper corner forward, so you can easily reach their bottom with the opposite hand. The pockets are closed with a valve 7 centimeters high. On top of the valve, instead of a solid Velcro panel, sewn two strips of Velcro brand measuring 4 x 5 centimeters (width / height). Flags or similar-sized insignia can easily be placed here.

At the front of both pockets there is a hole 2 centimeters wide, passing through the base of the valve. It is designed to place stationery: pens, pencils and markers, or objects of similar size (lanterns, antennas, etc.). Another channel for storing oblong round items is in front of the pocket on the left shoulder, and measures 2 x 12 cm. It can accommodate larger diameter markers, chemical light sources, or the brackets of your ballistic glasses.

Under the valves in the Crye Precision G3 Combat Shirt are no longer one, but two pockets measuring 14.5 x 18 centimeters and 14.5 x 15 centimeters (width / height), respectively. They vary slightly in height to make it easier for you to determine the right pocket in conditions of limited visibility, or by touch. They also differ in the height of the Velcro strips that are sewn on their outside. In the outer pocket it is 4 x 12.5 centimeters (width / height) to fix the insignia, and in the inner - 4 x 2.5 centimeters (width / height) to attach to the pocket valve. The pockets themselves can be used to place flat and bulky items of small size: stationery, notebooks, compasses and navigators, etc. To accommodate larger trinkets, the bottom and back edges of the pockets correspond, which can be further expanded by 2 centimeters in depth. 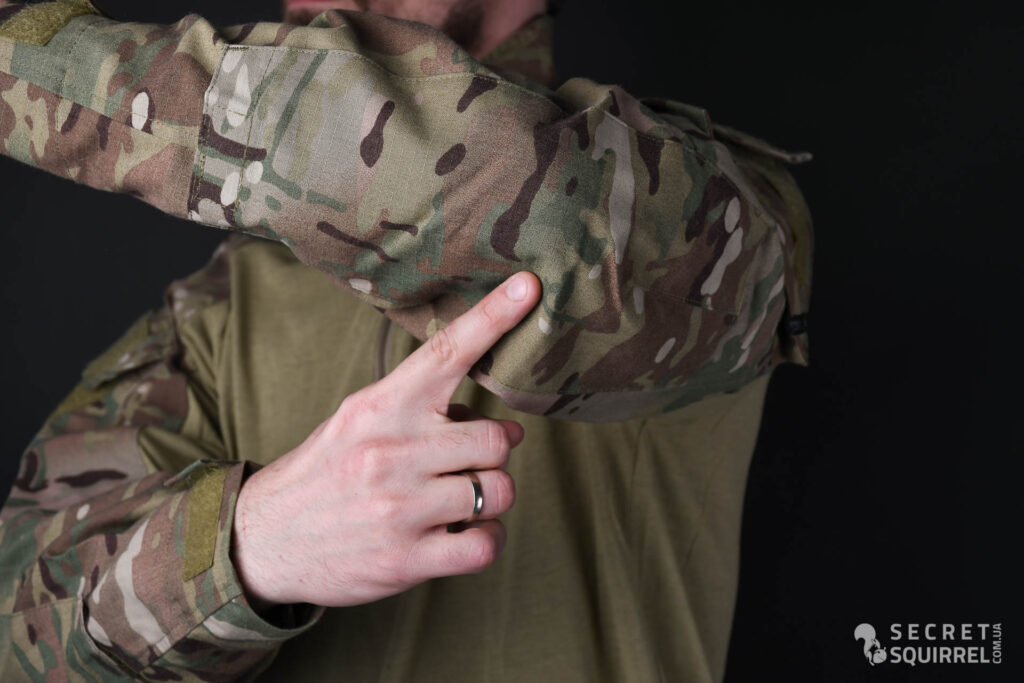 The elbows of the third generation combat shirt have also changed. There are still contour inserts of the main material with a total size of 15 x 29 centimeters (width / height). But this time there is no hole through which previously mounted integrated elbow protection - Crye Precision AirFlex Elbow Pads. This hole was replaced by a neck 9 cm wide, which is closed with Velcro, and is located at the bottom of the contour insert. So you still have the opportunity to install additional protection for the elbows. Its, however, will not be visible from the outside, as it was before. However, in case you do not use the dampers or temporarily remove them, dust, dirt and small debris will not get through the hole. So we can assume that this small flaw in the Crye Precision G3 Combat Shirt has been fixed. 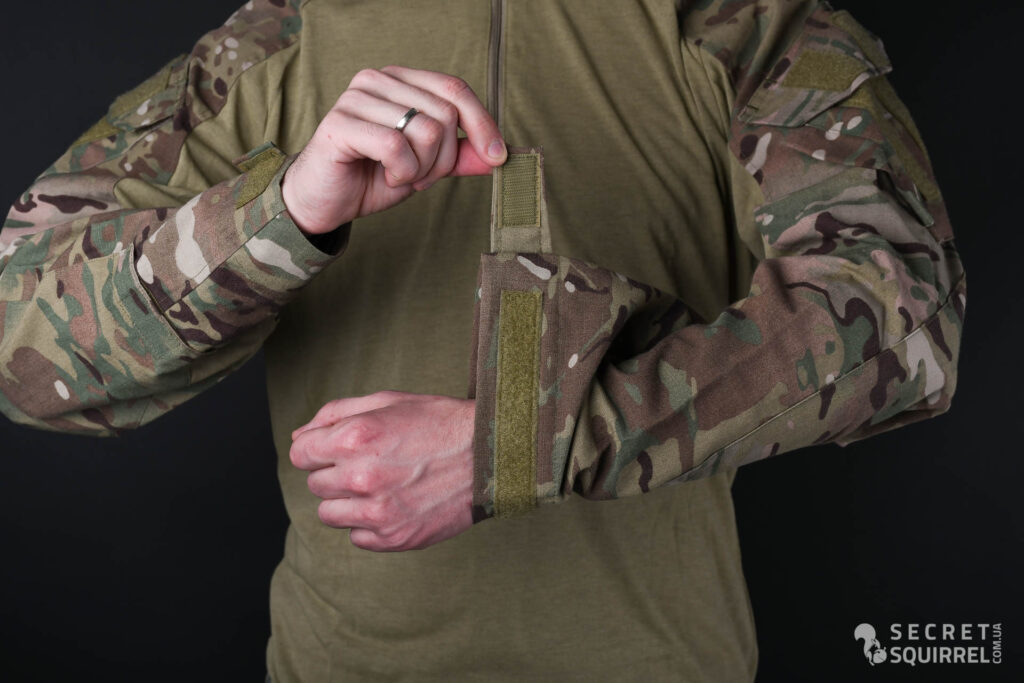 The cuffs of the combat shirt have a height of 5 centimeters and are adjustable in a circle. This is due to the 20 cm long Velcro and 6.5 cm strap. Compared to the Crye Precision G2 Combat Shirt, the strap is glued in the direction away from you, which in my opinion is more convenient than in the previous generation. This way you are less likely to cling to your own clothes and equipment when you press your hands to yourself. As for the ability to flexibly adjust the width of the cuffs to your gloves, watch or other accessories that attach to the wrist, everything has remained the same.

In general, the design of the Crye Precision G3 Combat Shirt has been made a number of design improvements that raise the comfort and protection even higher compared to the second generation of the Combat Apparel. Due to the change in the material of the torso, these improvements are felt from the first seconds of wearing a combat shirt. Comfort and protection of this item of clothing will be especially appropriate when using individual armor protection in the warm season, in regions with high temperatures and dry climates, and at high levels of physical activity.

Thank you to the punisher.com.ua store for the Crye Precision G3 Combat Shirt provided for our review.